Responding to racism - and other reactions to Covid 19

The Covid-19 crisis has thrown many challenges to schools. The immediate concern has been to continue teaching in some form while students cannot physically attend school.

But the crisis raises a number of important issues that schools will wish and need to take forward.

Covid 19 is truly an example of a global (rather than international) problem. It affects all societies, irrespective of borders. It will only be addressed successfully with international cooperation. The need to develop a awareness and understanding of global issues in schools is highlighted.

The likely origin of Covid-19 is bats eaten as food. Viruses crossing from non-human animals, particularly wild animals, to humans raises the issue of man’s relationship to the natural world. As we plunder, exploit and deplete the natural world, there is a greater chance of such virus transfers. The conditions in which animals are kept in intensive agriculture also raises the likelihood of animal diseases transferring to man, as happened with bird flu and swine flu. This is something each of us needs to consider as it affects our personal food choices and our political decisions.

Since early in the pandemic, anti-China and anti-Chinese feelings have been expressed. Racism has been mixed up with responses to the virus from early on.

Some politicians have claimed that “Everyone is in this crisis together.” But it is becoming increasingly apparent that some sections of society are much worse affected than others. Inequality matters.

The poor, those who live very closely with lots of other people in poor quality housing, those who cannot afford to stop working and thereby expose themselves to higher risks of contracting the virus – all of these are more likely to contract the virus, and to die. In the UK and USA, perhaps in other countries, black, Asian and other coloured people are more likely to contract and die from the virus – at least partly because they tend to be poorer, in worse housing and in less favourable employment situations than white people in the same countries.

Set against this background, the Black Lives Matter demonstrations in many countries around the world following the murder of George Floyd in the USA are highlighting racism and the very unequal lives of people with different skin colours; and the legacy of slavery in modern societies.

The disruption to air, road and cruise ship travel and manufacturing during the lockdowns has shown that pollution and carbon emissions can be considerably – and quickly - reduced. So addressing climate change is a real possibility – if we decide to do this. We have choices to make.

While educating students to be numerate and literate is important, the survival of humanity depends upon their appreciation of global issues such as those above, all highlighted by the current Covid crisis.

But you know this already. That is why you are involved in the IGCA programme.

I’ve been thinking about all of these issues and how they relate to our work in the IGCA. The issues relating to Black Lives Matter which have come to prominence recently are very relevant to the IGCA. The section Understanding other outlooks and cultures calls for IGCA participants to find out more about how people view the world differently. There are many books and articles on racism, and many IGCA participants may wish to explore some of these resources. But Understanding other outlooks and cultures involves participants having direct experience of hearing how others experience and view the world differently. While young people can learn from adults, it seems more impactful and direct for young people to hear about racism from other young people who have experienced racism themselves.

Here are some resources I have found that may be useful. They include some short videos in which children and young people of different skin colours talk about their experiences of racism and being treated according to their physical appearance. (Interestingly there are many, many videos about how parents and teachers can talk to young people about racism. Finding videos of young people talking about their own experience of racism is much more difficult! There seem to be far fewer. Why?) 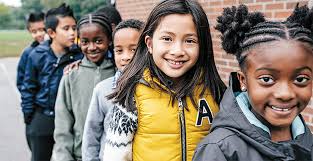 Segment from US NBC news

"Because I’m Latino, I can’t have money?" Kids on Race

Straight talk from middle-schoolers about race and what it's like to grow up in a racially charged USA.

A Conversation About Growing Up Black

Black boys and young men explain the particular challenges they face growing up in America.

A 2007 video repeating the “doll test” (children choosing between a black doll and a white doll) showing that black children develop low opinions of black people when young. 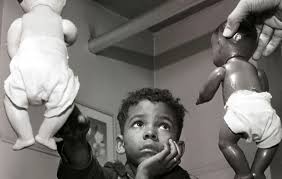 "Show me the doll that is nice"

Children growing up with racial inferiority

A short video of non-white Italian children’s response to a “doll test” and showing racial stereotypes – and poor self-esteem.

A short video (less than 4 minutes) in which Jane Elliott describes her work to combat racism. In 1968 she did an exercise with her third grade white students in which she told them that brown eyed children were superior to those with blue eyes. In 15 minutes they conformed to the stereotyped expectation. She has repeated this exercise with audiences large and small and of all ages for 50 years. She argues that ideas of superiority or inferiority according to skin colour develop early because of simple, repeated conditioning. She sets out her views clearly and succinctly and gives a clear and simple challenge.

There are many videos and resources for adults giving tips and ideas of how to talk about racism to children.

is a one minute video produced by National Geographic that gives many useful tips in a very short time.

Replies to This Discussion